Young people can slow down Climate Change but let's talk about their feelings first. Sign up for this digital interactive course on Climate Change Your chance to be a part of the #KindnessMatters campaign Sign up to our newsletter for fortnightly updates on the latest in the field of SEL Check our Career page for latest vacancies
Menu Newsroom

TECH 2018, held over three days, showcased the role of games and digital learning in enabling a shift from “transmissive pedagogies” to “transformative pedagogies” to create peaceful and sustainable societies. The conference saw participation by over 1,000 registered delegates from over 50 countries on a daily basis and witnessed highly engaging deliberations by experts in various domains related to education and technology such as games for learning, artificial intelligence for education, social and emotional learning and data privacy & ethics.

UNESCO MGIEP launched the second edition of its annual international conference titled the Transforming Education Conference for Humanity (TECH) 2018 in partnership with the State Government of Andhra Pradesh at the Novotel Varun Beach in Visakhapatnam City on November 15, 2018. TECH 2018, held over three days, showcased the role of games and digital learning in enabling a shift from “transmissive pedagogies” to “transformative pedagogies” to create peaceful and sustainable societies. The conference saw participation by over 1,000 registered delegates from over 50 countries on a daily basis and witnessed highly engaging deliberations by experts in various domains related to education and technology such as games for learning, artificial intelligence for education, social and emotional learning and data privacy & ethics. TECH comprised of 7 keynotes, 11 catalytic sessions and over 50 breakout presentations by more than a 100 presenters. The Conference was preceded by seven pre-conference workshops as well as a High Level Policy Forum with 70+ distinguished experts and policy-makers that focused on a comprehensive review of the Vizag Declaration on Global Guidelines for Digital Learning, followed by a keynote by Gregoire Borst, Professor of Developmental Psychology and Cognitive Neuroscience of Education, LaPsyDE on “The learning brain: A new perspective on education”. A key output of the conference was the adoption of the Vizag Declaration on Guidelines for Digital Learning as well as the signing of several Memorandums of Understanding (MOUs) and launch announcements. TECH 2018 also took social media by storm, witnessing almost 75 mn impressions - across Twitter, Facebook and Instagram.

On behalf of Madame Audrey Azoulay , Mr. Falt expressed: “By its mandate, UNESCO, is ideally placed to play a key role in supporting Member States increase the accessibility of technology and promoting the use of digital educational tools that encourage learning.”

Further, talking specifically about TECH 2018, Shri N. Chandrababu Naidu, in his rousing opening ceremony said, “The second edition of TECH is being held in the beautiful city of Visakhapatnam and it is very special to us as it is a successful innovation in the field of education. In the TECH 2017 edition, we entered into an MOU with UNESCO MGIEP to establish the hub for the science of learning. Next year, I would like to assess the progress in this regard. I want to move forward towards making technological advancement in education a reality.” 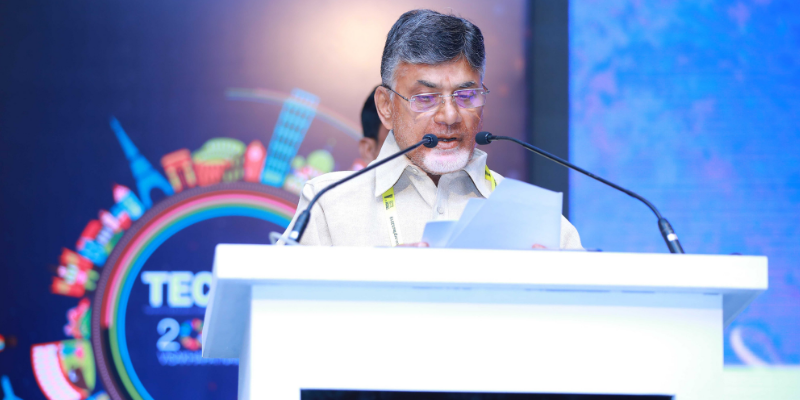 The opening speeches were followed by various product launches and MOU announcements including that of the JNV MyDream Project – a collaboration between UNESCO MGIEP, Navodaya Vidyalaya Samiti and Samsung; the announcement of a Design University for the Intelligent Global Hub for Digital Pedagogies to be established in Andhra Pradesh as well as the launch of the first Global Universal Screening App for Dyslexia: DALI (Dyslexia Assessment for Languages of India) in Telugu by Dr. Nandini Chatterjee Singh, Senior Project Officer, UNESCO MGIEP. 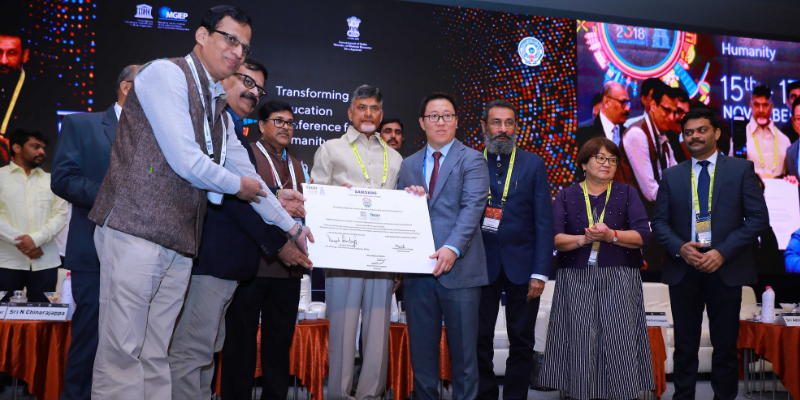 Following the announcements was a gripping TECH Talk by Dr. Anantha Duraiappah, Director, UNESCO MGIEP on the topic “Education: From Nurturers to Predators”. Dr. Duraiappah discussed the importance of the whole-brain approach to learning to produce and emotionally and intellectually resilient intellect and how education systems need to adopt this approach for better well-being and more peaceful and sustainable societies.

He expressed, “Eventually the goal of all education needs to be sustainable peace and development. We at UNESCO MGIEP believe that education needs to nurture not just intellectual capacity but also the emotional quotient of the child.” 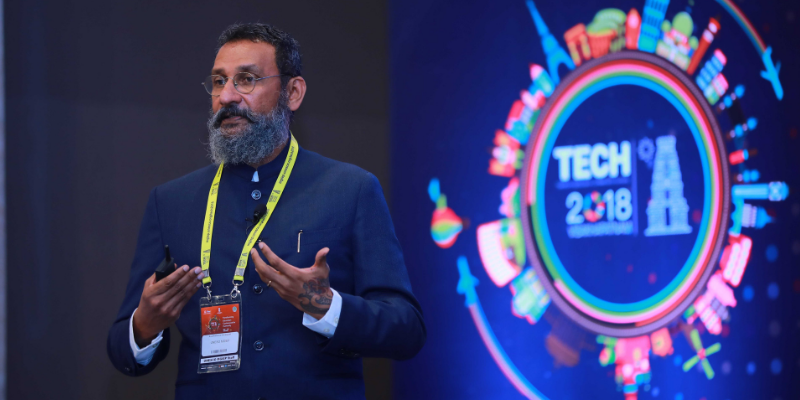 In addition, Day 1 witnessed two highly engaging keynote sessions on games for learning delivered by Ms. Jessica Lindl, Global Head of Education at Unity Technologies and Peter Vesterbacka, Co-founder at Lightneer, Fun Academy, Formerly Mighty Eagle at Angry Birds. The first day also saw numerous Catalytic Sessions on Social and Emotional Learning and Games &  Reimagining Education for the Future as well as a highly disruptive panel by a diverse panel of experts on Artificial Intelligence in Education: Who Owns and Who Manages, moderated by Ms. Aarti Shahani, NPR correspondent. Following the plenary sessions were a diverse set of interactive breakout sessions related to the key themes of the conference. 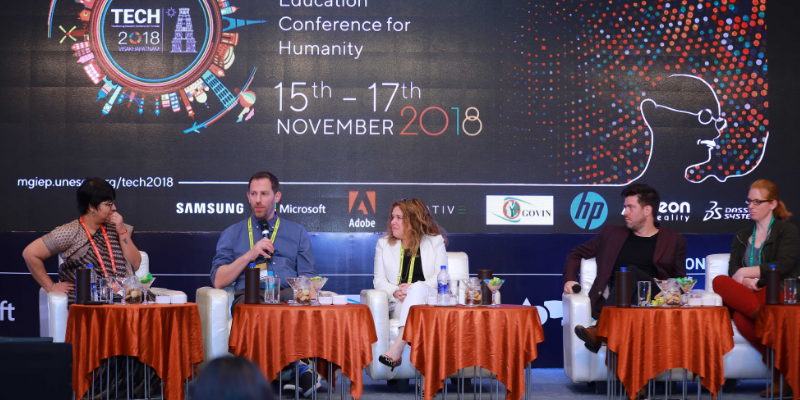 Day 2 of TECH commenced with captivating keynotes by Geoffrey Morson, a lawyer with over 45 years of experience and Dan Shefet, Lawyer at the Paris Court of Appeal (France) on topics related to data ethics and data privacy and how these issues need to be considered while using technology in education. 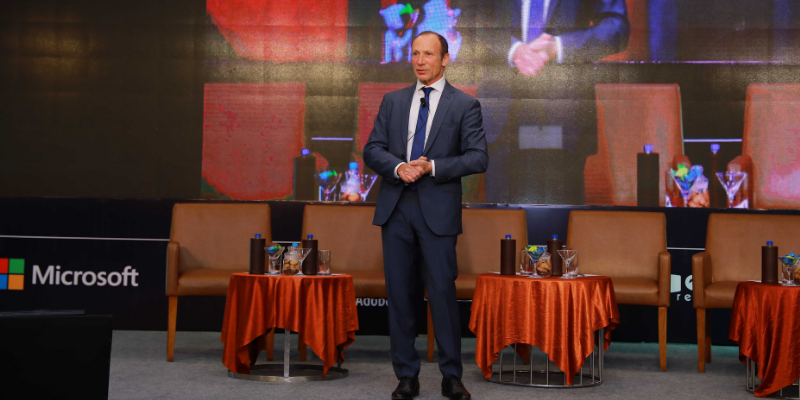 Additionally, day 2 witnessed some electrifying debates during the various catalytic sessions related to artificial intelligence and education as well as a discussion on whether games can replace textbooks and exams. Some eminent speakers included Shailesh Kumar, Chief Data Scientist, Jio; Yasmin Kafai, Professor of Learning Sciences, University of Pennsylvania and Elliot Soloway, Professor, Department of Computer Science & Engineering, University of Michigan, amongst various others. Various breakout sessions were held throughout the day, during which presenters showcased their work related to digital pedagogies, social and emotional learning and solutions to beyond four walls of a classroom. An interactive and engaging Learning Zone as well as stalls by Ed.Tech startups were also set up at TECH, where organisations and individuals presented their technology solutions to educators and students in a classroom style interactive format. 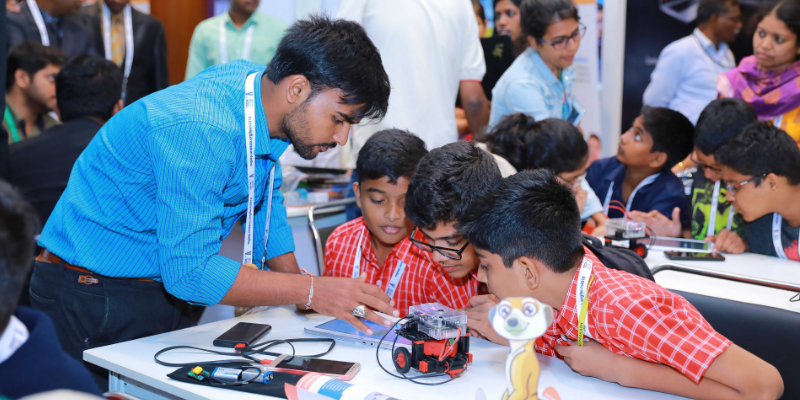 The last day of the conference witnessed keynote sessions by Kenneth Pugh, President and Director of Research, Haskins Laboratories, who discussed how dynamic brain imaging can inform our understanding of learning differences and optimal instruction in reading and Harri Ketamo, Founder & Chairman, Headai who spoke of artificial intelligence and its importance for education. Day 3 also witnessed numerous breakout sessions as well as Catalytic Panel Discussions on extremely topical subjects such as Global Guidelines: What, Why, How and the Intelligent Global Hub on Digital Pedagogies, to be set up by the Government of Andhra Pradesh in knowledge partnership with UNESCO MGIEP. The keynote, catalytic and breakout sessions were followed by the official closing ceremony. 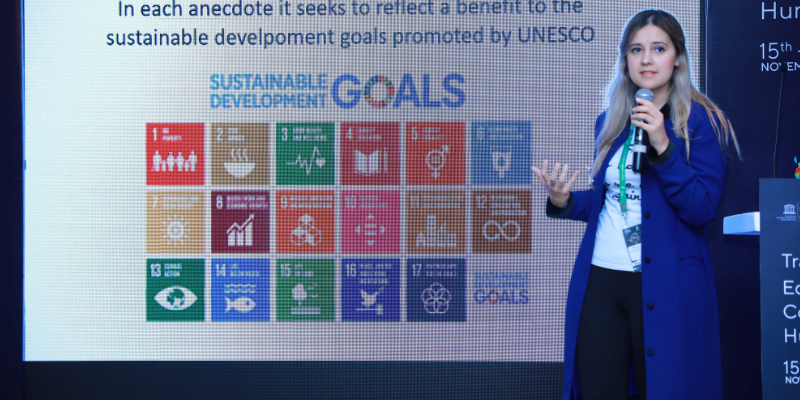 The most significant outcome of the conference was the Vizag Declaration on Guidelines for Digital Learning announced at the closing ceremony of TECH. The Vizag Declaration on Guidelines for Digital Learning were adopted against the backdrop of Intelligent Global Hub on Digital Pedagogy (IGHDP) or iHub announced last year. Deliberated upon by senior policy makers and ministers from 9 countries, domain experts in AI, data scientists, neuroscientists, education and developmental psychologists, researchers, curriculum experts, digital instruction designers, game designers, education technology companies, the Declaration calls for establishing standards of digital learning resources to determine digital products best suited to the educational needs of 21st century learners. The Declaration will be presented to the General Conference of UNESCO to be held in Paris in 2019 for consideration by its 193 Member States.

Dr. Anantha K. Duraiappah, Director, UNESCO MGIEP stated, “Vizag declaration has a ring to it and it would be great to see this dream getting realised. With these guidelines, we expect to generate valuable content specifications that will lean towards tangible outcomes.”

Present at the occasion, Shri Ganta Srinivasa Rao Minister, Human Resource Development, State of Andhra Pradesh said, “We in Andhra Pradesh have welcomed UNESCO MGIEP’s collaboration to create the Intelligent Global Hub on Digital Pedagogy (IGHDP) at Vizag as we see the potential of digital learning to create a large number of jobs, international collaborations, accelerate innovation and produce a highly skilled talent pool to service the knowledge economy.  Globally, the overall EdTech market is expected to hit $252 billion by 2020 with Asia Pacific, North America, and Western Europe being the largest markets. These prospects would make AP well placed with this iHUB to be a leader in answering that demand”.

Shri Ganta Srinivasa Rao and Dr. Anantha Duraiappah concluded the conference by inviting the attendees to participate in TECH 2019 at Visakhapatnam, the dates for which were announced to be December 9 -11, 2019. 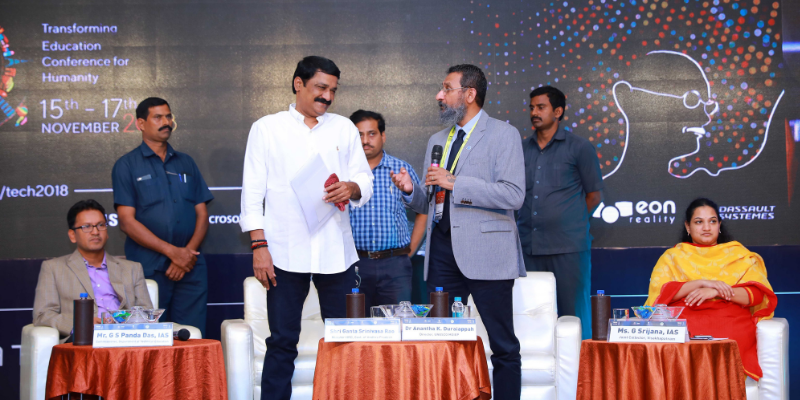