A meeting of minds

Sometimes, Karmel Zarzar dreams he is back home in Damascus, Syria. In his dream, he is very happy. When he wakes up in the temporary apartment he shares with four other Palestinian Syrians in Munich, Germany, he thinks about going back.

Home, however, is quickly becoming a distant concept. A little more than six months ago, the 23-year-old graphic designer escaped his war-torn country and boarded the first train headed to Germany. “It’s really strange how one moment decides your life,” Zarzar said, staring contemplatively into his coffee mug at a café in Munich, a pair of large headphones slung around his neck. 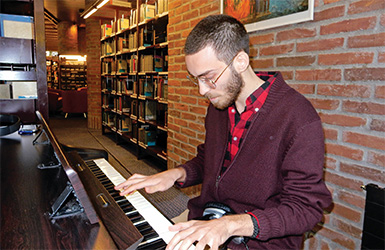 Tall and lanky, with short cropped hair, brown eyes and thick-rimmed glasses, Zarzar could pass for a student almost anywhere in Europe. Unlike European students, however, Zarzar cannot rent his own apartment, apply for a job or enroll in a university until his papers confirming his refugee status are completed—a process that has taken months. In January, he may once again be transferred to a tent housing more than 300 refugees. He hopes not.

“Lots of people are against the refugees… You can only understand what that feels like if you have been in such a situation. It’s just luck”.
Karmel Zarzar

But more than anything, he hopes he can eventually get into an academy for graphic design and study there. His dream is to create paintings and digital art to represent the voices of the refugees trying to build a new life far from their homes. “Lots of people are against the refugees,” Zarzar says in his nearly impeccable English. “You can only understand what that feels like if you have been in such a situation. It’s just luck,” he adds.

Though higher education in Germany is mostly free of charge, refugees such as Zarzar face particular hurdles due to missing transcripts, different academic credit systems, and a long wait before gaining official recognition as a refugee—a necessary requirement for enrollment. However, new initiatives in Germany may soon offer opportunities for Syrian refugees with an academic background to study at German universities. For the first time, the University of Bremen, in northern Germany, is opening its doors to the newly established Syrian community—irrespective of transcripts, previous academic credits or refugee status.

The university’s IN-Touch programme, listed by the European Commission as an example of good practice and a role model for other institutions, allows all refugees with some academic background and a basic knowledge of German or English to participate in university lectures and seminars, access the library, and connect with other German students. Through a “study-buddy” system every refugee who enrolls in the programme partners with a German volunteer student. The volunteers then help their partners to settle into university life and access the resources they need, including books, to participate in their courses.

According to Dr. YaseminKarakaşoğlu, Vice President for International Affairs and Diversity at the University of Bremen, the idea of the IN-Touch programme reflects the university’s philosophy of offering accessible, high-quality education, as well as an identity and a home for refugees who have lost both. “The idea of sitting in a tent waiting for a future that may begin in a few weeks, months or even years would drive anyone crazy,” Karakaşoğlu says. “We offer access to knowledge, development and education.”

“It’s touching  because you can see how this is changing (students’) perspectives and allowing them to prove themselves in an academic environment…”
Jens Kemper, Project Manager, IN-Touch

With only € 6,000 (approximately USD 6,500) in funding for 2015 and 2016, the programme has started helping around 150 young refugees access the university resources and seminars. After attending lectures and successfully completing coursework, students registered in the programme receive a certificate. Though the certificate is not yet the equivalent of university credits, it allows students to make good use of their time and invest in something meaningful.

“It’s touching because you can see how this is changing (students’) perspectives and allowing them to prove themselves in an academic environment,” says Jens Kemper, the project manager of IN-Touch. “We had underestimated the emotional impact.”

Though support through volunteers and professors has been overwhelming, Kemper says that there have also been challenges and limitations. One of the problems has been a high drop-out rate. This is often attributable to unaffordable public transportation to and from the university, insufficient language skills, and other family commitments such as caregiving, which take up time otherwise devoted to studying. 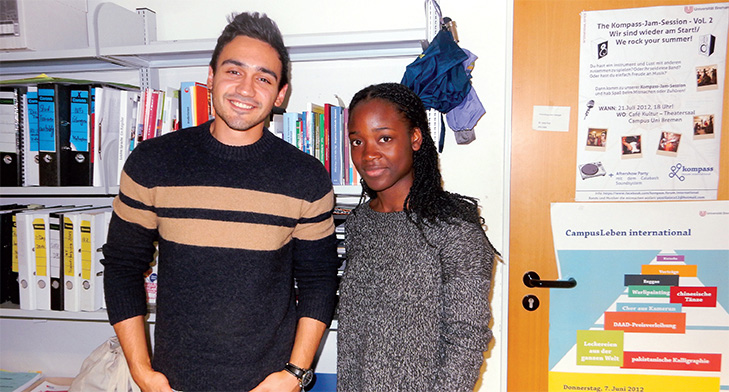 For those currently enrolled in the programme, however, the advantages have been apparent from the outset for both German and Syrian students. Pelumi Olusanya, a German student in her second year of public health studies, volunteered to help one of the refugees integrate into the university system. “I’ve learned a lot,” Olusanya, 21, says reflecting on her experience as a mentor. “I never knew anything about Syria and now I get to hear other things from what you hear in the media,” she says, adding that the mentorship has developed over time into a friendship.

Olusanya’smentee, Saleh Shehada, a Syrian student from Aleppo, sits across from her in an empty seminar room. At 27, Shehada has a bachelor’s degree in business administration and has worked for several years in marketing. But when he was drafted into the army, he fled to Germany in the hope of finding a job and continuing his education. In July 2014, after a harrowing trip partially conducted on foot, he spent the last of his money and arrived in Bremen. Here, he slept on a mattress in an overflowing camp and says he felt hopeless and depressed.

After hearing about the IN-Touch programme, he enrolled in psychology and marketing psychology classes and began to take a new interest in his future. “I got out of my depressed mood and started to get involved and people here were very helpful,” Shehada says. “Students approach me and translate for me because the psychology classes are in German. And I help them with their projects.” Though the current courses do not offer him credits or a degree, he hopes to become fluent in German and someday study neuroscience. “I really like it here and I would like to stay,” he says.

“Education is a core human right, but we act as if it were a luxury. In a wealthy country we need to share our facilities with people who can not only benefit but also contribute.”
Dr. Yasemin Karakaşoğlu, Vice President for International Affairs and Diversity at the University of Bremen 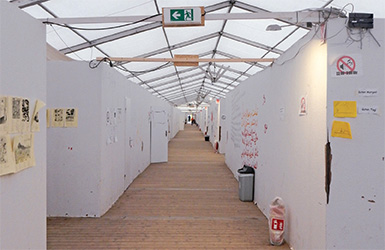 Camps for Syrian refugees in Germany

According to Karakaşoğlu, who is also a professor of Intercultural Education, the programme’s benefits go beyond university credits and the possibility of one day earning a degree. The mentorship system ensures that German students are exposed to different realities and begin to appreciate what it means to come to another country as a refugee. Most importantly, student volunteers get to know the refugees as more than helpless individuals and recognize their strength in overcoming challenges and starting their lives again. For the professors, who open their seminars to refugees, this is a first-hand experience of global interconnectedness.

For the refugee students, the experience is about shaping their identity and allowing them to prove themselves in an academic setting. “People need more than shelter and food,” Karakaşoğlu says. “Education is a core human right, but we act as if it were a luxury. In a wealthy country we need to share our facilities with people who can not only benefit but also contribute.” And, even if the refugee students end up returning to their homes in a few years, the programme will have helped to create a bridge between Germany and the students’ home countries. According to Karakaşoğlu, the programme is also an investment in international relations.

Other universities around the country have also begun to recognize the merits of the programme, which may soon be replicated in major cities such as Bonn and Berlin. An estimated 80 universities in Germany are also setting up similar initiatives. In the meantime, the University of Bremen is starting to scale up its efforts in the hope of accommodating close to 500 refugee students in the coming years through increased federal funding.

“Academic knowledge seeking is universal. This is where we can all meet at the same level and this is what higher education can contribute,” Karakaşoğlu says.