Learning Disabilities - What, Why and How?

Only a decade ago, the term “Learning Disability” was virtually absent from the educational system in India. Even today, most teachers have of course seen it in the classroom, but unfortunately only a small number understand how serious it is, or know how to deal with it. Having a child with a learning disability (or “LD”) in the classroom can make a trained qualified teacher seem inadequate, and leave child and parents feeling bewildered, frustrated, overwhelmed and angry.

It is extremely important to reach out to the lakhs of teachers who deal with children afflicted by a form of LD in regular schools. They are the first professionals able to screen the children who are struggling in their classrooms, and a child’s chance for early assessment and support hinges on the ability of teachers to successfully identify it. All research in the fields of neurological development and education puts tremendous emphasis on the importance of early intervention; hence arming regular teachers with the ability to screen children “at risk” is critical.

Although there has not been an exhaustive study, the incidence of LD in India is likely at least between 10 and12 per cent of the school going population. This roughly means that in a given Indian classroom there are at least four children with LD. If not addressed, we stand to lose out on a significant chunk of the literate population from the future productive work force of the country.

One of the simplest and effective ways to expand and create awareness is by empowering teachers to be able to identify the early warning signs.

The biggest challenge that early identification of LD faces is that it is a “hidden disability,” presenting no physical manifestations or sensory markers. It’s not surprising that this often leads to bafflement as teachers and parents fail to recognize the signs in such children, and are unable to manage the internal struggles the child goes through as he or she stumbles to learn, adapt and socialize. The lack of awareness, fear of stigma of being labeled “disabled”, and shortage of sufficient equally distributed support and resources further compound the process of identification and screening.

One of the simplest and effective ways to expand and create awareness is by empowering teachers to be able to identify the early warning signs. Having said that, LD being relatively newly-recognized in India, there are still no clear-cut and commonly-accepted assessment procedures, policies or indigenous tools to diagnose LD in India. The problem is compounded by India being a multilingual country, and one in which basic education facilities are not available to a sizeable portion of the population.

In practice, most of the LD assessment and diagnosis follows the definition by the United States Government stipulated in Public Law 94-142 of Learning Disabilities.

“Specific Learning Disabilities means a disorder in one or more of the basic psychological processes involved in understanding or in using language, spoken or written, which may manifest itself in an imperfect ability to listen, speak read, spell or to do mathematical calculations. The term includes such conditions as perceptual handicaps, brain injury, minimal brain dysfunction, dyslexia and developmental aphasia. The term does not include children who have learning problems which are primarily the result of visual, hearing or motor handicaps, or mental retardation, emotional disturbance or environmental, cultural or economic disadvantages.” 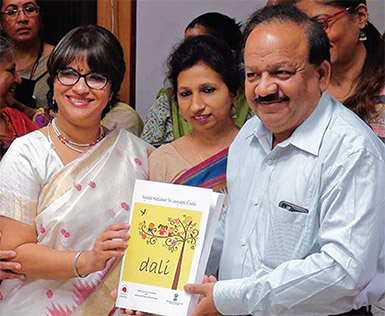 In India, the National Brain Research Centre has developed the Dyslexia Assessment for Languages of India, or DALI. DALI is a package that contains screening tools for school teachers and assessment tools for psychologists to identify dyslexia in the context of Indian languages. The DALI includes two screening tools for dyslexia (for school teachers) namely the JST (Junior Screening Tool) for classes (1-2) and the MST (Middle Screening Tool) for classes (3-5) in four languages, Hindi, Marathi, Kannada and English.

Other formal assessments for learning disabilities include DST (Dyslexia Screening Test), NIMHANS Index for SLD and Behavior Checklist for Screening the Learning Disabled developed by Swarup and Mehta (1991).

The informal assessments, which can be performed by teachers and special educators, include recommendations on screening observation schedules, checklists, interviews and work samples, as well as curriculum-based assessments. 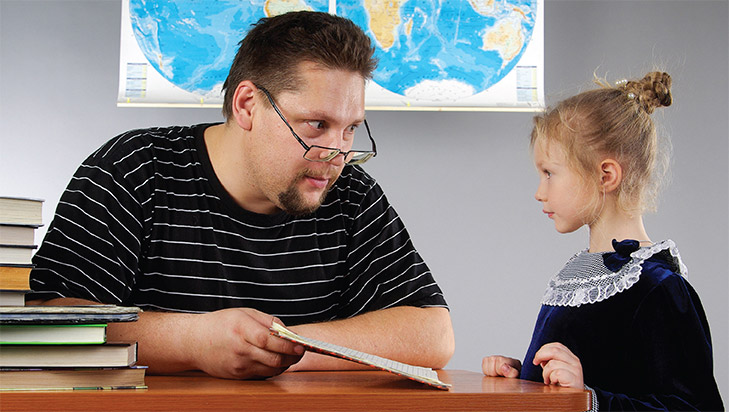 With focus on teachers who can be the first level in the identification of children with LD, the following common types of LD along with their symptoms are listed.

To prevent over-diagnosis – as many children with normal learning abilities will struggle at some time or the other with academics for a variety of reasons – these symptoms must be considered with caution. The symptoms must also be consistently present over at least a period of six months. It is not necessary for each child to show all the listed symptoms. However, a minimum of 60 per cent of the symptoms should be present to assess the child to be at-risk. The manifestation of the symptoms will vary with age of the child, so a child with reading disability may struggle with learning the alphabet in primary school and reading comprehension later in middle school. There should be substantial observation of the child and his work during the period of screening. Information should be gathered from as many sources as possible to rule out bias. The child’s relevant background information regarding medical history, family background and past performance should be taken into account.

LD is a broad term. There are many different kinds of learning disabilities. Most often the academic difficulties fall into three broad categories: 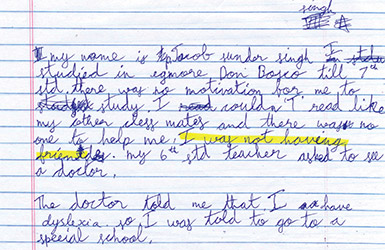 Writing too involves several brain areas and functions, including networks for vocabulary, grammar, hand movement, and memory. A child with dysgraphia may begin with handwriting difficulties, which can later manifest into struggles with age-appropriate written expression. 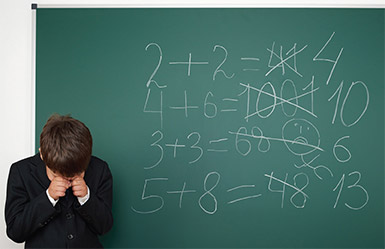 A child suffering from dyscalculia may find recognizing numbers and symbols confusing and have difficulties memorizing facts, aligning numbers and understanding abstract concepts.

Arithmetic involves recognizing numbers and symbols, memorizing facts, aligning numbers and understanding abstract concepts such as place value and fractions. Any of these may be difficult for children with developmental arithmetic disorders, also called dyscalculia. Problems with numbers or basic concepts are likely to show up early, whereas disabilities that appear in the later grades are more often tied to problems in reasoning.

Even before numbers are introduced the child may find it difficult to match, sort, group by size, shape and colour different objects such as beads, wood cut outs and other manipulatives

Apart from academic skills being affected in children with LD, two other areas are in motor skills and in overall ability to self organize in areas of decision making, giving priority, planning, attention and problem solving

Apart from academic skills being affected in children with LD, two other areas are in motor skills and in overall ability to self organize in areas of decision making, giving priority, planning, attention and problem solving. They are known as dyspraxia and non verbal learning disability (NVLD). 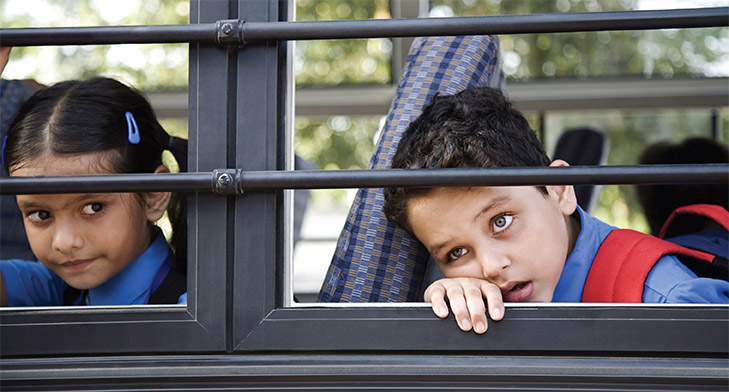 Dyspraxia is a term that refers to a specific disorder in the area of motor skill development. People with dyspraxia have difficulty planning and completing intended fine motor tasks. Dyspraxia can affect different areas of functioning, varying from simple motor tasks such as waving goodbye, to more complex tasks like brushing teeth. 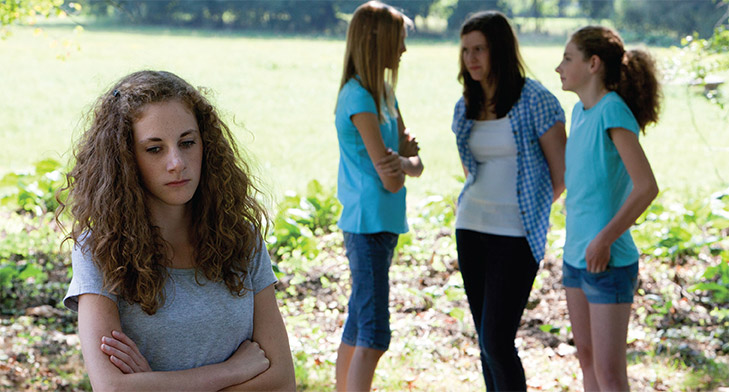 Nonverbal learning disabilities can be tricky to recognize and diagnose. Children with this disorder are unable to recognize and translate nonverbal cues, such as tone of voice and expressions. They will have problems with organization, and at the same time may have assets which help them through early years in school. 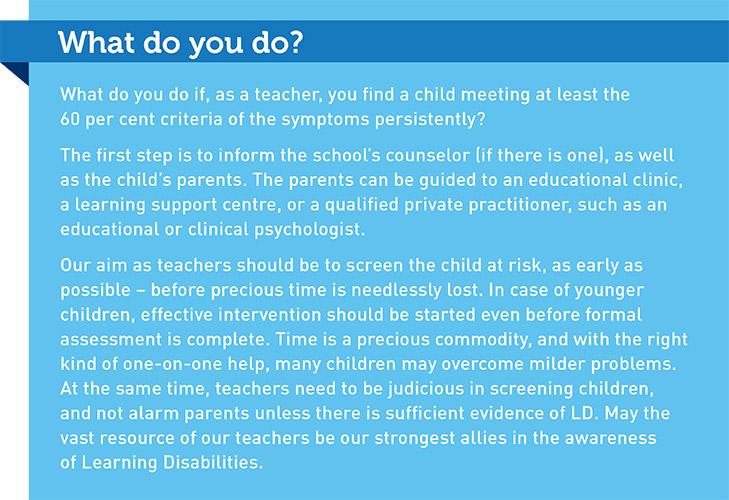 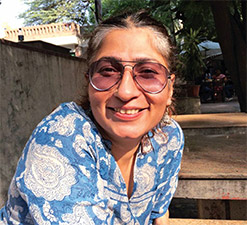 Geet Oberoi with a doctorate in efficacy of remedial intervention in Learning Disabilities has been working in the field of special education for over 23 years. She focuses on the assessment and remediation to children with special needs and professional development courses primarily for instructors. In recent years she has delved in research to enhance the concept of inclusion in the Indian education system. She is an active member of numerous national committees and the founder of Orkids, a pioneering organization in India in the field of Learning Disabilities and Inclusive Education.

She was awarded the 2010 Guruvar Award for  “Outstanding Indian Teacher of Children with special needs” and the 2012 “Women Achiever Award” for putting the education of the disabled on the road map.